OUR LADY OF LOURDES

Our Lady appeared 18 times to Bernadette Soubirous, a young poor and sick girl in the grotto of Masabielle, close to Lourdes in France in 1858.

She asked for a chapel to be built in the site of the apparitions and when asked who she was, She replied : " I am the Immaculate Conception "

Our Lady asked Bernadette to wash her face at the fountain but there was no fountain there, so Bernadette dug a hole in the ground, and with muddy water washed her face while people ridiculed her, however from there sprang the famous fountain of water that has healing attributes. Many sick people have bathed themselves in that water and there have been at least 64 reported miraculous healings.

Millions of people from all over the world go to Lourdes yearly in the hope of obtaining help from the generous Mother of God.

Bernadette became a nun, she died when she was 35 and her body is still incorrupt. 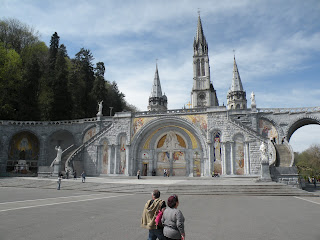 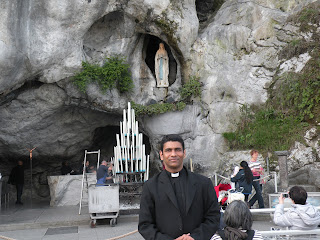 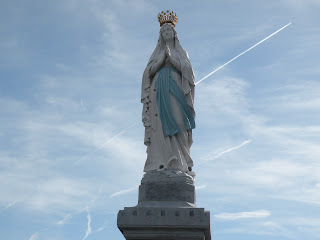 Our Blessed Mother appeared to a poor and sick fourteen year old girl who lived in the Pyrenees at a time of turmoil in France. On Thursday, February 11th 1858, Bernadette Soubirous, her sister Marie and another friend had gone to a nearby river to gather firewood. While Marie and her friend crossed the river to search the other side, Bernadette stayed on dry land. While searching for wood she heard a loud noise like the sound of a storm coming from a nearby grotto known as Massabielle. At the mouth of the grotto was a rosebush which was moving as if it were windy, which it was not. From the interior of the grotto she saw a golden-colored cloud, and soon after a Lady, young and beautiful who came and placed herself at the entrance of the opening above the rosebush. The Lady smiled at Bernadette and motioned for her to advance. Bernadette lost any fear she may have had and fell to her knees to pray the Rosary. After both she and the Lady completed these prayers (with the Lady only said the Lord's prayer and the Gloria), the Lady slowly withdrew to the interior of the grotto and disappeared.

Bernadette experienced eighteen visitations from Mary over a six month period never knowing who the Lady was until the last apparition. During the ninth apparition, Mary instructed Bernadette to dig a hole in the ground and drink and bathe in it. The hole later turned into a spring of water which Mary promised would be a healing spring for all who came to use its waters. Mary also asked Bernadette to tell the local pastor, Cure Peyramale to have a chapel built in honor of her appearances there. The Cure accused Bernadette of lying about the apparitions and told her to find out from the Lady just who she was and demanded from her that she perform a miracle by making the rosebush in the grotto bloom. On March 25th, the Feast of the Annunciation, Mary answered the Cure's request when she told Bernadette, who had only received a rudimentary religious education, "Que soy era Immaculado Conceptiou"
I am the Immaculate Conception. With these words, Our Lady confirmed what the Pope had declared as official Catholic Church doctrine just four years earlier - a highly unlikely fact to be known by an uneducated fourteen year old in rural France.

The apparitions were declared authentic in 1862 and Lourdes rapidly became one of the world's major pilgrimage sites.Thousands have been cured from a variety of illnesses, both physical and spiritual, and a clinic to support the millions of pilgrims who come to Lourdes operates to this day. Bernadette returned to a life of obscurity. She became one of the Sisters of Notre Dame in Nevers and died there in 1879 after a long and painful illness. She was declared a saint in 1933, not because of the apparitions, but because of her dedication to a life of simplicity and service.
Her body remains incorrupt.
Posted by Fr. MILTON at 10:44 AM